Happy birthday to Chris! (I really must remember to get the number candles next year…)

Unfortunately, I woke up with the worst crick in my neck imaginable, and he wound up spending the day waiting on me hand and foot! I managed to leave the heating pad a few times, in short bursts. Thank heavens this morning it was right again, just the barest twinges remaining to remind me of yesterday’s agony.

Anyway, I think he had a good day despite that. We hung out at home, he unwrapped presents, chatted to his folks and mine, he played some Kerbal Space Craft (a video game he enjoys), we had one of his favorite dinners – fish and chips – and generally relaxed.

We also got a completely unexpected gift – someone from freecycle gifted us a projector, which I’ve been wanting for quite some time, wewt! It’s old, but it works perfectly, and that’s the bit that matters! Hooray! 🙂 Now I can take it along when needed for my community groups’ meetings (looks like it’ll be in use at WI in November), and we can bore our friends with our vacation photos 😉

But without further ado, photos from yesterday! 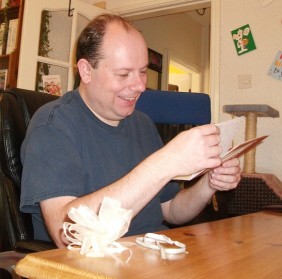 I think he liked the silly drawings I drew in the card I made him. 🙂
Full size image

The cousin’s card that arrived from Germany bore this odd stamp. Hopefully the brother-in-law who collects stamps will be able to find out about it and tell us the story behind it.
Full size image 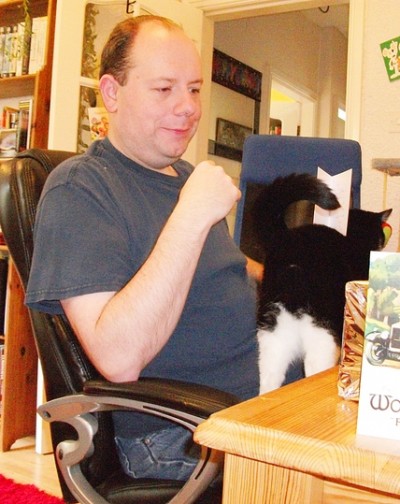 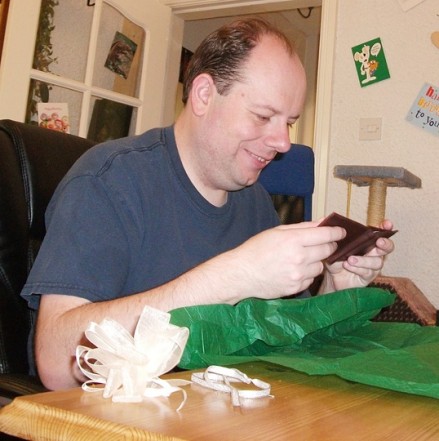 I decided not to follow through on my threat to get him a Peppa Pig themed wallet. He did want to know what stores will take the slip of paper that says “Credit Card” that came inside the new wallet. ;-P
Full size image 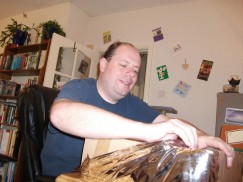 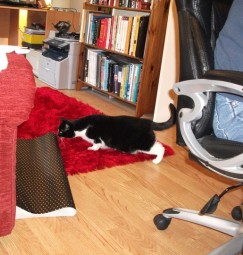 Cass is a glue junkie; she’s sneakily trying to see if any tape has been left sticking out.
Full size image 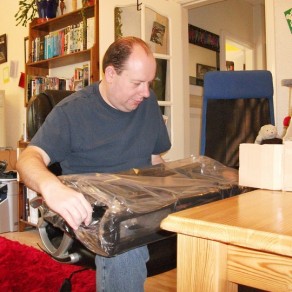 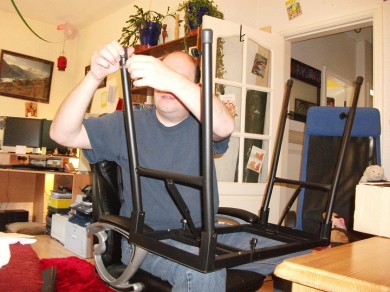 Setting it up! It’s taken me far too long to find a sensibly-shaped folding, adjustable keyboard stand. I was so thrilled when I found this one! X-shaped and Z-shaped ones dominate the market – but they look like they’ll be nothing but stories of knocking your knees on them! This shape is usually a fixed stand, and we haven’t the space in our place for a fixed keyboard set up, alas. But a folding one, yes! Hip hip hooray! And it had to be adjustable so it could be made to be the right height for Chris, of course.
Full size image 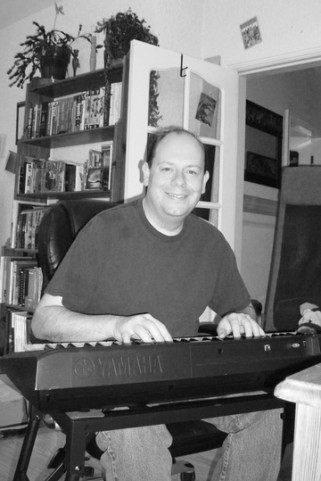 I don’t generally like black and white, but the colors didn’t come out well in this photo, so black and white looked much better, actually. While I was playing with this photo, Chris looked over and asked what I was doing to him. I told him the photo didn’t come out very well, so I’ve done this and that, but I’m still not happy with it; could he think of anything else to do? He suggested I draw a paper bag over his head — silly man!
Full size image 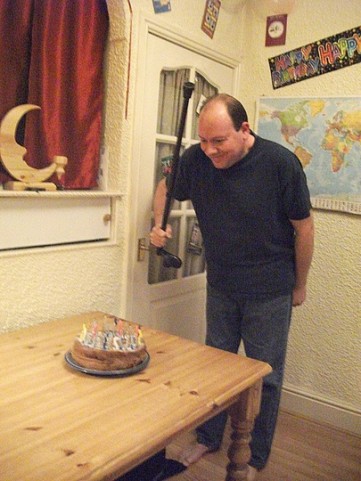 Chris shaking a cane – not his cane – because that’s my silly husband. 🙂
Full size image